An interesting conversation happened at work several years ago, and it has been one of my favorite stories to tell. Let me introduce you to a man I have worked with for years. I have know him for about 15 years and his name is long and difficult to pronounce, so he goes by an American name, Lon. 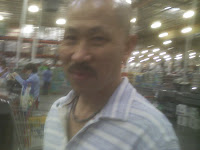 He was born in Thailand and moved to the USA when he was a young man. He still has a very heavy accent and leaves out words in his sentences.

I watch you, I make sure you wuhk hawd, you do nothing ahh day.

At any given time you might be engaged in work dialog with any of the crew on my shift and find yourself talking just like him. We all do. Kinda like talk like a pirate day, only it's talk like Lon day, everyday. So, on with the story.

Lon walk up to a co-worker and says:

Lon:"You sea lion?"
co-worker "Lon, what are you talking about?"

by now Lon is starting to get frustrated.

Now the co-worker is equally frustrated, and their voices are escalating in tone and volume.

Lon now realizes that what his co-worker is hearing, isn't what he is saying, so he changes it.

Lon: "No! You see supervisor."

Now the light bulb comes on over the co-workers head.

It's the classic, what you heard is not what I said. You sea lion, said with an Asian accent is translated, you see Ryan. You won't find that in any translation book.

This happened about 10 years ago and we still refer to Ryan as the sea lion.

Do you have a nick name? I would love to know what it is and how you got it?
Posted by SuperDave at 8:46 AM

This story is hilarious!

My nickname is "Supermom". One needs no explination as to where I got that name.

I don't have a nickname, but my Dad does. He does a lot of work w/ Korean Airlines. When he first started working w/ Korean Air, they sent him a letter of gratitude--the letter was addressed to Bah Chones---ha, his name is Bob Jones...it was hysterical, I still think he has that letter...

I'm too busy laughing at this story to tell you how I got my nickname!
JuJuBean