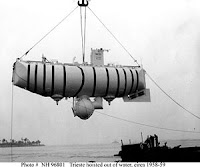 As a homeschooler, I look for opportunity to teach things my child is interested in. We recently studied the Mariana Trench. The Bathyscaphe that explored the very bottom of the deepest spot on Earth is named the Trieste. In the articles I have read, it happened in 1959. It had a crew of two, and the dive has never been repeated.

More people have been to the moon than to the lowest point on Earth.

Since this is one of my favorite topic's, I was elucidating my information to a co-worker. He was very inquisitive and asked a lot of questions, which I answered. As our discussion continued, I realized he was skeptical to the point where he finally said, "I don't believe it, you must have misread it".

Later that day I printed the information, and took it to work. He was still skeptical, and said he was going to do his own research.

He returned the next day and told me that there is a following that hold to the belief that this is a hoax.

To which I replied, "you mean like the lunar landing?"

To which he replied, "exactly."

I was unable to find any solid info to support the theory that this is a subversive plot, except a few rants that stated it was not possible with 1959 technology to accomplish this feat. Plus, if it were able to be done, why has it not been repeated?

So I ask you, do you believe in the dive and/or the lunar landing?

After all, we are being asked to believe in things we have not seen by the people who launched the projects.

Maybe they can find my sunglasses I lost in Hawaii.
Posted by SuperDave at 6:33 PM

Gosh, I hope its all true, well look like a buncha idiots if not, we've all bought into it. I do prefer a certain amount of niavetee, and choose to believe it to be true. But I also acknowledge the lengths to which "Science" and scientists will go to not to have to admit they are wrong (have you seen Ben Stein's "Expelled"? Great movie!)

I will check out the movie! I too enjoy niavetee. Like majic for children. It's more fun to believe.

Maybe you can find Atlantis, too.

I believe there was greater technology before the flood of Noah's days than most people believe.

I believe it would do us well to unplug the t.v. and video games and study like the great discoverers and inventors in history (Galileo, Newton, Bell, Edison, even Einstein) to make new discoveries and inventions. To boldly go where no man has gone before.

(I guess that reveals that I've done my time before the boob tube myself.)

In any case, I believe.

I also agree with Youthful One. I bet there was tons of awesome technological masters back in the day. I mean, the hanging gardens in Rome was amazing. And that was just for flowers. But the plumbing had to have some serious thought.

Dude, you used the word "elucidating". That alone makes me believe almost anything you say!

I will have to talk to my Mr. Factoid. From the time he was very little he was obsessed with height and depth. I'll have to ask him what he thinks about the Marianna trench and get back to you.