There ought to be a law! 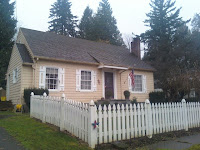 This is my first rant! We moved into our house in 1980. It's an old neighborhood and the houses are on big lots and range in styles. Ours was built in 1926. When I moved in, the old man across the street, in conversation said, I have live here for 40 years. I was 25. He had lived in his house longer that I had been alive! We were the only ones in our immediate neighborhood that even had children!

The older couple that lived behind us has died and the house went up for sale. It was a sprawling ranch with a basement and a mother-in-law wing. Back in the day it had a small basketball court that was lit with a flood lite for the neighborhood youth activities. Our backyards are back to back and with the slope of our yards, I could just see the top of the roof over the fence.
I am hopeful that a new family would move in and have an 8 year old boy for my gson to play with. The house has been razed and several trees have been cut down.

After the re-working of the land and debris hauling, the foundation was poured and the building began. Here is the next phase of the project. 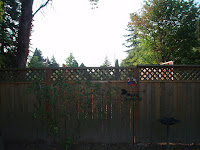 Notice the height above the fence line. I'm thinking, Ok, it's going to be a little taller than the previous home. But it's not too bad, I think I can live with this. I knew it was going to be two stories and more bedrooms than the old home.

I then discovered that this was actually the first level and that the garage was under the house and there was one more story to go! Here is what I see from my deck now! 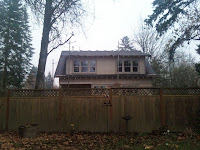 Oh, yeah, I forgot to mention that when the sold the old house, they subdivided it and they are going to build TWO HOUSES back there! I can hardly wait...NOT!
Posted by SuperDave at 2:12 PM

I am so very bummed. There goes ALL privacy.

Great. No more running around in your undies, eh?