We as a family decided to take an adventure. We considered many different options and finally settled on the Mt. Hood railroad train ride. This turned out to be great fun on a summer afternoon. The train was moderately occupied and we watched out the window at the passing farms and orchards. 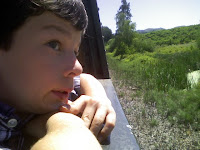 we wondered from one end of train to the other, making the daring leap of death across the gated openings where you go from one car to the other. The constant clacking of the tracks and the swaying of the cars was delicious and new. We even went upstairs and stuck our heads out the window to feel the wind and smell the smells.Eventually the train pulled into the station and we headed home.

We decided to continue our adventure and took the back roads towards home. This should be where the red flags go up.

We turned onto a winding lane and it soon turned into a gravel road. There were quite a few mountain bike riders and a few cars and trucks going both directions. We kept going and were greeted by small streams and vistas to die for.

By now we had driven for about an hour and the road had split and forked many times. There were now no more riders or other vehicles. We were now on roads that were meant for trucks with 4WD. Good thing we had new tires on the Minivan. Convinced that the main road had to be close, we drove on.

Finally, we decided to abandon ship and turn around. Funny thing about gravel roads, they look exactly alike. Exactly. EXACTLY.

Have you ever been lost? I mean really lost? Not just misplaced, lost. We were to the point that our dialog had alerted our 7 year old that something was wrong. Maybe it was the fact that we were comparing cell phones to see who had bars and who didn't. Or maybe it was hushed statements like "ok, we still have over half a tank of gas and it will be light for at least 4 more hours.

My spouse was especially concerned about having to "make the call to 911." Because that's where she works. We imagined news broadcasts like, 911 dispatcher calls herself for rescue. Co-workers laughing in the background.

We finally see a truck going the opposite way, and the look on his face said it all. He pulls up next to our dust coated mini van, stopped in the middle of God's country and says, "you don't have a clue where you are, do you." I mustered up my man voice and replied back, firmly and directly. No.

He smiled and said, you can keep going that way but I don't think your car will make it, and it's about 3 hours to town. Or if you turn around you can go back, just turn at the rock that looks like a bear, go 2 miles and turn left at the bear that looks like a rock, head towards the second star on the right and straight on till morning. Well that's what it sounded like. I replied, uuhhh...

We look back with fond memories of that day. My Grandson refers to it as "get lost Mountain." He wants to go back.

Lost Mt. I want to go there.

Life is all about adventure...especially to a child.

This is a great story! You told it so well.

I sometimes miss being a kid...

One of my sons was lost in the woods near our home with a friend of ours once. They'd gone horseback riding and had to return a horse they'd borrowed from the neighbors. The neighbors right on the other side of the woods from us. It took them probably 4 hours to make it 1/4 mile back to our house. And I am sure they walked much more than 1/4 mile. But my son remembers it fondly to this day!