What is this picture? 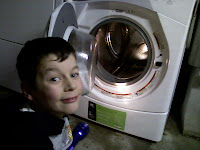 Dryer? You're good at this.

Now what do you think M was pretending it was? I will tell you after you guess the other two pics.

This one is a little harder. 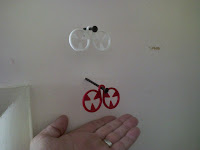 These are sock sorters from Tupperware. He took the liberty of installing these in my bathroom. Not as sock sorters. What could they be? Inquiring minds want to know. 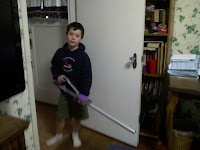 If you own a Dyson, you will recognize the extension tool removed from the base. What is he using it for? 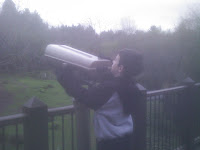 This is the observation tower at the zoo. You know, put in a quarter and see stuff close up.


Ready for the answers? Compare the photos below, with the ones above. It's easy to see how he could pretend they have alternate uses.

Ok, the dryer is trully a jet engine. The flashlight is just a flashlight (for now) to watch it spin.

The sock sorters are a pair of bike hangars. He installed these when he was 4. They are still stuck in the wall of my bathroom. I keep them as a reminder to "imagine" 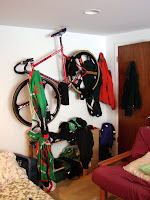 The vacuum extension was used as a mini gun. A formidable weapon that spews 3000 rounds per minute. It was an awesome spectacle on youtube.

The obsevation tower is an anti aircraft weapon. When you're 8, you can never have too much firepower. Don't want the zoo to become over run with terrorists.

Posted by SuperDave at 4:47 PM

Adorable! If I am ever blessed to have a kid(s); I'd really really really love a boy!!! When I see you're posts I automatically think of my dad and him being a Grandpa :) He'd love a boy after having girls for the past 27 years...Okay, the tears are starting to flow now...

And somehow I can't help but think that much of this is fostered from being raised by a boy like YOU, SuperDave. :)

It's awesome that he has such a vivid imagination. Shows he's not a dull boy or one not encouraged to discover and explore.

I love that kid!