Remember the good old days? Do you have an older relative that says things like, "When I was your age we used to make our own toys!"

Well here are a couple of "things" we played with when I was little.

First, and probably one of my favorite toys we made, was from an old hand crank telephone. 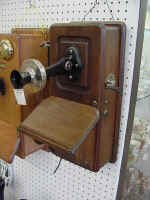 Did you know that inside these old phones is a magical device called a magneto.

I think they are called that because it is a combination of two words (mag)ic and (neet)o! It's even fun to say, try it, I'll wait....

My older brother, he was 6 at the time, I was 5, discovered that the magneto was removable from the wooden box. The magneto has two wires coming off of it and of course the crank. The funny thing about magnetos is, they produce electricity. If you hold on to the wires while someone cranks it you get an nice little shock! So our little playmates would come over and we would pull the magneto out of our toy box and "play". First everyone sat in a circle holding hands. The kids on the ends each held on to one of the wires. Another kid sat with the magneto on the floor and cranked it as fast as he could and the electric current would pass through everyone. This lasted as long as you could stand to hold on. The only rule was,you could not have a turn at the crank unless you were willing to sit in the circle. I didn't know it at the time but these old magnetos can produce anywhere from 6 to 110 volts! Shocking isn't it!

Here is another one that we played with from time to time.

I know what you're thinkin'! Kids playin' doctor! Not exactly, you see this is an old thermometer, that means it has the magical liquid known as mercury. It was a rare treat whenever a thermometer was accidentally broken. Dad would hold onto the the broken tube to warm it so the mercury would rise out the broken end. He would collect it in a small dish and give it to us to play with. We used to sit on the front porch and play with the silver liquid. Breaking it into smaller globs, then coaxing them back into one shining mass. This would last until it would roll off the porch into the dirt or between the porch boards. Thanks Dad!

Anyone want to schedule a play date? I just got a brand new set of steak knives!!
Posted by SuperDave at 10:55 PM

I remember going down the laundry chute and tossing light bulbs on the patio to hear them pop.

Are you radioactive? Who lives in the house where you dropped the mercury? Bye, I gotta go call the EPA...